In order to provide space for the infrastructure of modern living, many natural landscapes are uprooted and the animals within them displaced. While reducing habitat loss for wild animals continues to be a central goal of environmental agencies, habitat loss is not the only impact of urban sprawl.Urban waste runoff can leak into rivers and lakes causing algal blooms which kill aquatic life, and light pollution interferes with the mating behavior of some insects like lightning bugs, resulting in major population declines. Another often-overlooked impact of urbanization is the overproduction of sound and how it, too, can be lethal to surrounding wildlife.

Largely created from city construction and traffic on highways, the over-abundance of noise interferes with an assortment of animal behaviors such as attracting mates, searching for food, and raising offspring. Noise can even impact animals at the cellular level, causing an increase in stress-related hormones. Short-term exposure to stress hormones can be beneficial, but if prolonged, they can impair immune function and reduce an animal’s ability to survive. So, can can traffic noise really lead frogs to, well…croak? 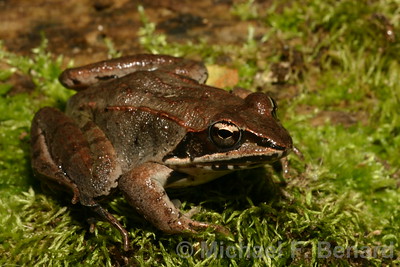 To find out, in a recent study scientists evaluated the effects of prolonged noise exposure on the immune health of wood frogs (Rana sylvatica). Further, they evaluated whether some wood frog populations, which have lived next to loud, urban environments for generations, have adapted to their new status quo. To investigate these questions, wood frog eggs were removed from ponds found near major highways and from ponds secluded far from traffic noise. Once fully grown, frogs from both “loud” and “quiet” ponds were placed into rooms for eight consecutive days where they were either exposed to simulated traffic noise or pre-recorded natural sounds from the quiet sites. After exposure to one of the sound rooms, frogs were evaluated for changes in their immune function and stress hormone levels.

Next, researchers directly compared the amount of stress hormones produced from both quiet and loud pond frogs when exposed to either room type. Quiet pond frogs subjected to traffic sound produced significantly more stress hormone after eight days than frogs hearing natural sound. In contrast, the frogs raised from loud ponds showed no difference in stress hormone levels across the two rooms. Further, the loud pond frogs’ stress hormones were low overall, comparable to that of the quiet pond frogs hearing natural sound. The lack of change in the traffic pond frogs’ stress suggests that they have adapted to their noisy, urban environments. However, the quiet pond frogs’ prolonged stress response, along with their diminished production of anti-microbial peptides and weight loss, all suggest reduced survival in the wild when exposed to urban noise. 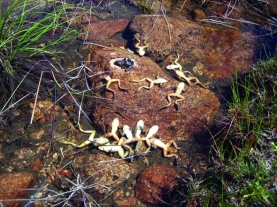 To many, it may appear as a positive that the loud pond frogs seem to have adapted to urban noise. However, the ability to successfully adapt may not extend to other frog species, or even other wood frog populations. The key to successful adaptation is both time and the ability for affected populations to persist until resistances to urban sound evolve. The frogs in the study which lived close to urban noise had between 15-35 generations to develop their physiological resistance to noise pollution–a luxury frogs facing more imminent threats may not have. In recent decades, a disease called Batrochytrium dendrobatitis (Bd) has been decimating frogs globally, and the anti-microbial peptides produced by wood frogs helps protect them from this infection. As noise pollution reduces peptide production in frogs unfamiliar with urban sound, this increases their susceptibility to the disease as well as passing it to other vulnerable individuals.

So, while the evidence that wood frogs adapt to noise pollution is a good sign, efforts to reduce urban noise can help sustain naïve frog populations as they adjust to the continually changing landscape. And although this study focused on frogs, these same effects of urban noise are likely impacting other animals as well. As such, working to limit the sound we produce may help to sustain our local environment and protect species at risk.